In case you missed it. The whole point of this site and my business is reuse, recycle, recreate. And in case you missed it, there are a ton of old, bad vinyl records about, that need to be recreated. I need a charging station. We all need charging stations these days. I have a phone, a nook and a Note. That does not include various of there things that need charging. Originally, I wanted to use a wine gift box for the project. Of course, I could no longer find them by the dozen at the thrift store. Records I had. And the idea might work that way too. With some modifications. So it began. 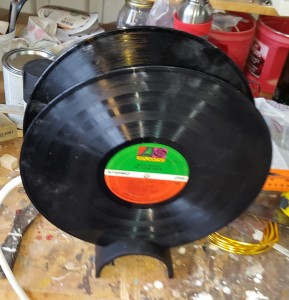 I decided on upright records, because I thought it would look cool. It presented a lot of problems as it turns out. Including, how the hell to make it stand up. Half circle of PVC pipe turned out to be a very cool looking solution. So I had a bit of a mockup together at this point when I ran into the real issue. The power strip I was using! The plus all went in facing sideways or 90 degrees off the line of the charger. That meant that all the pugs would stick out the side of things. Which means nothing would fit like I wanted it too. It would not be sleek, instead it would be a fat thing that would be out of control. So I had to hunt down a new power strip with a different orientation. Turned out, they don’t make them that way as much anymore. Finally found one..not $5.00, but $10.00! Idea looking less profitable now. Hew are some more pics of the power strip holder I had to make, then extend, the power strip attached and the device stand all interested between the two records. Still working to see if it will hold up to longer term usage. A little concerned that a Ipad or my Note will bring it crashing down. Maybe if I designed it just to hold the charger and one device it would work properly. But I have 3 devices and a number of other things that run on chargers. 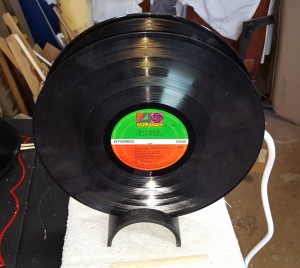 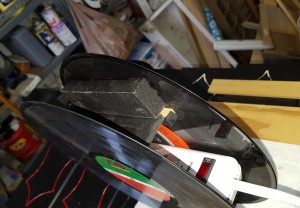 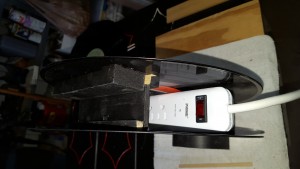 Should the records be flat? I might try that in version 2. That would present another set of issues I suspect. But I want something more stable and still able to charge multiple items at the same time. Also, something I can make multiples of without using to much new or costing to much to sell.